Join Premium now and start learning chess tactics systematically with Puzzle Academy, or read on for details and examples about the new content.

Watch a video with examples of the new endgames and other levels:

Last month we published the two endgames king and pawn versus king, and queen versus pawn. In some of the levels the computer's play wasn't always the best. For example in the endgame where you have to draw with your king versus king and pawn, the computer would give up the pawn to easily. This can sometimes happen when the computer is able to see all the moves to the end of the game, and thinks it is a draw no matter what and just plays a random move.

I'm happy to report that the computer's play has been improved in this and many more cases in puzzles labeled as "endgame training", and is now more challenging. In addition this content update includes two more complete endgames: rook versus knight, and rook versus bishop. These endgames occur in games a lot, so it will be very useful to learn and practice them.

This endgame is usually a draw, but there are two cases where the side with the rook has winning chances:

Trapping the cut off knight can be quite tricky. Here is an example from the game Gustav Neumann - Wilhelm Steinitz, Baden Baden 1870, one of the strongest chess tournaments at the time (Black to move and win):

If you look at the solution you can see that Steinitz played this endgame very well. He would later become the first official world champion in 1886.

On the solution page, you can also replay the game. Then you'll see that this endgame resulted from this position (White to move):

Here Black threatens checkmate, as well as capturing the pawn, so White has to underpromote to a knight with g8=N+. The resulting endgame is drawn (unless the pawn is a rook-pawn, which is the corner case mentioned above), but White made a mistake a few moves later and let the knight become cut off.

This underpromotion trick is quite frequent in the endgame rook versus pawn, and one reason why the endgame of knight versus rook occurs so often in practice. Therefore it is very useful to learn and practice this endgame.

There are four new skills to cover this endgame:

Here is an example where White can win with the opponent's king on the edge of the board:

When you unlock a new skill level, you play 10 puzzles from that level. For some of the endgame levels, this can take a bit longer than with puzzles, for example checkmating with bishop and knight, or drawing with a bishop against a rook can take many moves.

So you probably don't want to play 10 puzzles in a row, but would rather player a few and continue on another day. This was already possible before, by just stopping and resuming another time, but it wasn't clear in the user interface. You just had to navigate away or close the browser or something like that to pause.

Now you can at any time during an unlock press the "Pause" button to pause the unlock.

In the "Checkmate patterns" course, there is now "Fool's mate" in two. Here is a typical example:

In this game black was an experienced player, but it was a blitz game. In games with longer time control such mistakes are more typical for beginners. They weaken their king position, or take too long to castle.

I think it is an important skill to punish mistakes like that. That's why I've also added a new skill to the "Attacking" course:

In this new skill, you can learn how to attack the uncastled king. Included are forced checkmates, as well as checkmate threats that force a win of material, for example double attacks.

Initially I had planned to start with two-movers, because all one-move puzzles would be forced checkmates. However when I tested the level with these checkmates in one, it was so much fun that I included the level after all. Therefore, the first two levels are included with this content update.

Here is an example from level 2:

This is the from the famous game François Antoine de Legall de Kermeur - Saint Brie. White has sacrificed the queen, but now delivered checkmate with 1.Bxf7+ Ke7 2.Nd5#.

This checkmate is named "Legall's mate" after this game. Note however that in this game, the setup was a trap, because the queen sacrifice could have been easily refuted with Black playing Nxe5 instead of capturing the queen. There are other correct ways to achieve this mate, for example if there is no black knight on c6.

In the "Defence" course, there is a new skill "Defend piece and avoid capture defender". For example:

With the last move ...Rd5, Black is attacking the white queen on f5.
The queen also has to defend White's bishop on g4, which is attacked by the knight on f6.
The queen has two safe squares, from where it can keep protecting the bishop: f4 and f3.
1.Qf4? allows Black to capture the defender with 1...Qxf4!. After White recaptures with 2.gxf4 (or exf4), Black can win the now undefended bishop with 2...Nxg4.
Therefore 1.Qf3! is the only good defence.

The solution page for this defence puzzle shows the threat and the line to be avoided.

In the "Combinations" course, there is now "Decoy into skewer" level 3. In this combination, a piece sacrifice forces an opponent's piece to a square, where it can be attacked with a skewer. Level three includes puzzles with five moves, which can be quite tricky. Here is a nice example:

Puzzle Academy is the most comprehensive tactics course, and personalizes your learning and practice based on your strengths and weaknesses. Join Premium now and start learning chess tactics systematically with Puzzle Academy.

Future development and your feedback

Work has already started on additional endgames and levels, stay tuned for the next update.
As always your feedback is important and welcome, please contact me if you have any questions or suggestions. 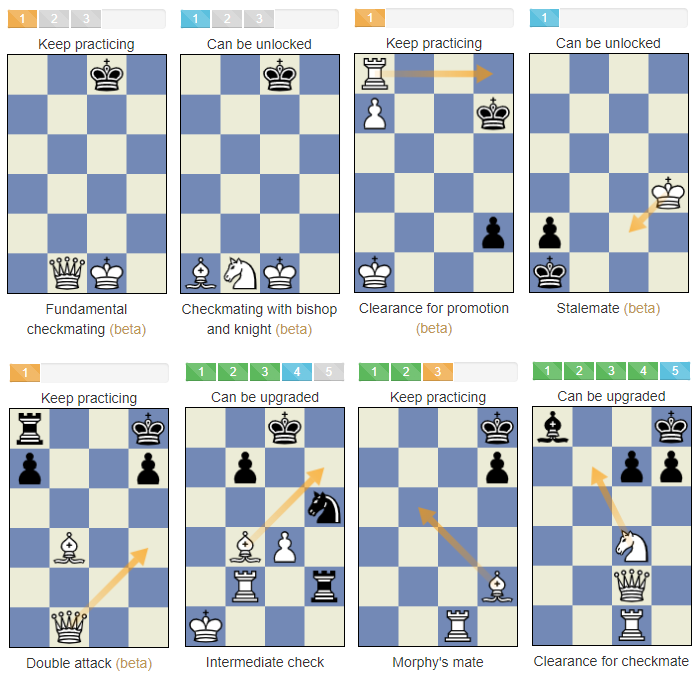